American Mah Jongg (2017 NMJL card). The 2017 card is with us! Let’s go over it together, shall we? Just the hands that warrant discussion today. From top left…

2017 #2: The parenthetical says “2 or 3 Suits.” Players often question how a three-color hand can be made in two or three suits. Well. Here’s how: 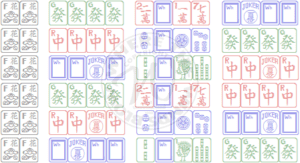 Like Numbers: the League unfortunately did not include a parenthetical saying “Any Like Numbers.” But consider: if it was intended that these hands be made with ones only, the section name would probably have been “Ones” instead of “Like Numbers.”

Like Nos. #2: This is one of two hands on the card that include flower pungs. Whenever you see a player expose a flower pung, you know that player can only be making either Like Nos. #2 or W-D #5.

Quints: gone is the 1123 hand that has confused so many. Gone for now, anyway. It’ll surely be back.

Consec. #1: The usual alternate version (with pairs at the ends). Did you ever notice that every blue card since 2009 has the pairs at the ends? But don’t count on that pattern continuing; the red 2008 card had them too.

Consec. #2: The most powerful hand on the card (consecutive numbers) is in its usual alternate form (pung-kong-pung-kong), and in its traditional #2 position.

S&P #7: This is a first (or at least a first in a very long time): the card dictates suits. It was necessary to forbid dots, so that a player would never need four soaps. Making the hand with all four soaps would ratchet up the difficulty so much that it ought to be worth 75¢ (dots would then be worth more than craks and bams). Lastly, the League could have (should have?) shown GG and RR here, rather than the DDs.

For more from Tom Sloper, check out his book The Red Dragon and The West Wind (click on link).