A note from Where The Winds Blow: We received cards from the League today (April 20, 2018). We ship cards out to our customers WITHIN ONE BUSINESS DAY OF RECEIVING THEM. If you have not received your cards from us, you will have it shortly. We do everything in our power to get cards to our customers as soon as physically possible.

The below article is By Tom Sloper

American Mah Jongg (2018 NMJL card). The 2018 card is now with us. As I analyzed the card this year, I made some interesting observations. First, this card contains more hands than usual. The cards from 2008 to 2016 included 51 or 52 hands. Last year’s card listed 53. And this new card lists 54 hands. It remains to be seen what impact there might be from having so many hands listed on the card. Last year there were rumblings about a high incidence of wall games; could be a connection?

Repeat Patterns vs. New Patterns
30% of the hands are repeats from last year, 50% are repeats from previous years, 9% are new patterns not present in cards in the previous 18 years (I didn’t care to dig back farther than 2001). 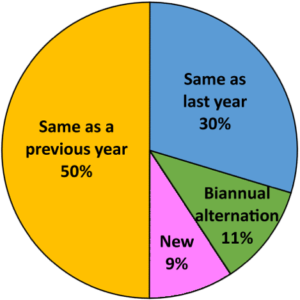 The usual biannual alternating hand structures are present (Consec #1 and Odds #1 have alternated to low-end pairs instead of opposite-end pairs as usual, and Consec #2 has alternated from pung-kong-pung-kong to pung-pung-kong-kong. Because this alternating structure is always reflected in Evens and 369 as well, the alternating-structure hands comprise 11% of the hands. Some may argue my counts, due to different ways to view hands with minor variations. For instance, 2018 #1 is just like 2017 #1 except now it’s a 3-suit hand. Odds #5 was last seen in 2002, but it was a two-suit hand then.

The new-pattern hands are 2018 #4, Evens #1, Quints #2, Quints #4, and Consec #7. I don’t think the Twelves are all that different conceptually from last year’s Thirteens.

Flowers in General, and Flower Pungs
The past couple of years, flowers were sparse in the middle pane (Consec and Odds), but this year flowers are in bloom again. Especially noteworthy this year are the flower pung hands (Evens #1, Any Like Nos. #2, Odds #5, and 369 #1).

Other
“Like Numbers” is now “Any Like Numbers.” It remains to be seen if that will reduce questions.
I believe fives are going to be in very high demand this year. Everybody is going to be looking for fives. If you don’t start with fives, don’t try for fives.

For more from Tom Sloper, please visit his website at www.sloperama.com

Tom Sloper is a video game designer and producer. His work on Activision’s “Shanghai” franchise led him into the world of mah-jongg. He has contributed to several mah-jongg books and wrote “The Red Dragon & The West Wind.” He hosts the Mah-Jongg Q&A Bulletin Board and writes the Mah-Jongg FAQs, and a monthly mah-jongg column, “Sloper On Mah-Jongg,” on his website at Sloperama.com

For more from Tom Sloper, check out his book The Red Dragon and The West Wind (click on this link).